Foot Medvedev: Sands fell asleep to the speech of Putin and Erdogan 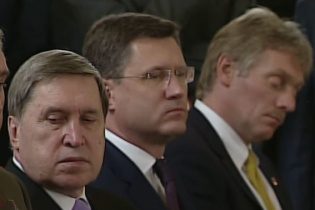 Foot Medvedev: Sands fell asleep to the speech of Putin and Erdogan

Putin’s press Secretary started to feel sleepy during the speech of the President of Turkey.

Press Secretary of the President of Russia Dmitry Peskov fell asleep during the press conference of Vladimir Putin and Turkish President Recep Tayyip Erdogan in Istanbul.

The event was broadcast live, so the incident Peskov said the journalists, writes Tjournal.

Notes that Putin’s press Secretary started to feel sleepy during the speech of Erdogan, but he will continue to NAP when the floor was taken by the Russian President.

When Putin finished his speech, there was a loud applause, and both the President stood up and shook hands. Then Sand with two rows of the Russian delegation stood up, not forgetting to take along a portfolio.

Peskov noticed sleeping at the meeting of Putin and Erdogan. Not all Medvedev to doze off https://t.co/7PvPXCaUft pic.twitter.com/eFvdsYWbsV

Recall, the Russian Prime Minister Dmitry Medvedev is famous for the fact that often fall asleep at official events. For example, in 2014, people saw during the broadcast, as Medvedev fell asleep during the opening ceremony of the Winter Olympic games in Sochi.