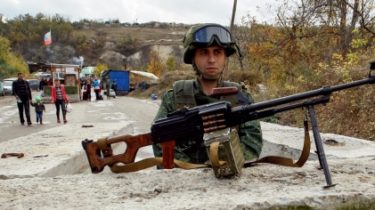 The militants “LNR” remain in their positions in the village of the Luhansk.© Reuters

The separatists accuse the Ukrainian side is not ready to start breeding parties.

The militants “LNR” deny that they began to withdraw its troops from the village of Lugansk, as previously stated the Deputy Minister of Ukraine on the occupied territories Georgy Tuka.

The official representative of “people’s militia LNR” Andrey Marochko told the separatist edition “PERSONS” that as of 18.30 on Tuesday 10 October, the militants proceeded to the diversion of forces near the settlement.

Read also: Donbas bred troops: the risks and danger that may wait for Ukraine in the Village of Lugansk

Marochko accused the Ukrainian side that it is, in his words, still not confirmed its willingness to withdraw its troops from the village of Lugansk. The militants “LNR” claim that they will start diverting their forces simultaneously with the Ukrainian army.

Four other soldiers were injured. Victims of the night there. This is the official information of the headquarters of the ATO. Because of the attacks planned framework breeding in the Village of Lugansk had to be postponed indefinitely. However, at the headquarters of the ATO noted that today the situation in Lugansk direction slightly improved. There, they have not detected any attack from heavy artillery. The situation is similar in the direction of Donetsk. Militants there, too, reduced the number of attacks.