In the capital, the tram derailed and damaged cars 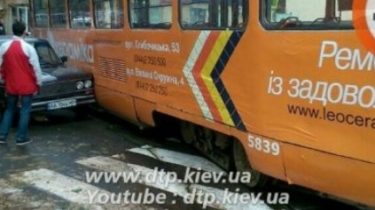 In the capital, the tram derailed and damaged cars

Fortunately, no one was hurt.

In Kiev, the tram went off the rails.

The tram hooked the car VAZ, which prostila by.

As a result of accident nobody suffered.

The accident occurred in the streets of Kyiv.

We will remind that earlier in Kharkov on the street of Academician Pavlova, next to the bus stop “French Boulevard” in front of the hospital the number 8 tram came off the rails and crashed into a kiosk.

For an incident that occurred in the morning, traffic was temporarily halted so that many residents had to walk to work.

Year-old child trapped under a tram in Odessa, died in intensive care

The girl who on the eve in Odessa was hit by a tram and died in intensive care. The child broke away from his mother, and suddenly jumped on the rails from behind parked truck. The tram had to stop, but the girl still pushed. She was hospitalized with a closed craniocerebral injury and fracture of the shoulder in a state of moderate severity. Doctors ‘ prognosis was favorable, but the child died of shock.