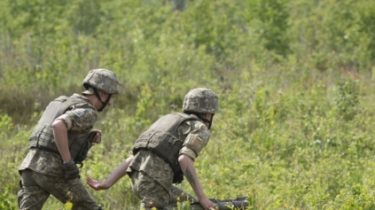 Officially the day there were no casualties, only wounded.

According to the ATO headquarters, during the day was wounded four soldiersand no fatalities. But volunteers from the charitable Foundation “come Back alive” reported that the loss is still there, says the story TSN.19:30.

According to them, today killed two soldiers. It happened during the shelling of the AFU positions in the Luhansk region. At the same time, at the headquarters of the ATO noted that in this area the situation has improved slightly. For the past day they have not detected any attack from heavy artillery.

The situation is similar in the direction of Donetsk. Militants there, too, reduced the number of attacks. Activity they demonstrated only in Novgorod and the plant. But on the Mariupol direction the defenders of Ukraine and worked as a prohibited weapon. The whole night terrorists shelled Marinka and Shirokino. And already at 9:00 in the morning began a massive bombardment of the positions on the stretch of Shyrokyne – Water from heavy artillery.

Four soldiers were wounded, the victims of the night – no. This is the official information of the headquarters of the ATO. The volunteers of the charitable Foundation “come Back alive” reported that the loss still there. According to them, today killed two soldiers during the shelling of our positions in the Luhansk region.