The Ukrainian military blew up the vault militants near Marinka 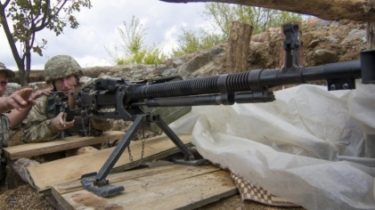 The Ukrainian military blew up the vault militants near Marinka

The enemy responded by attacking DRG.

In Marinka, the terrorists suddenly two infantry fighting vehicles fired at positions of the Ukrainian military. Our soldiers believe that it was the Russians celebrate the birthday of its President, says the story TSN.19:30.

“I left two infantry fighting vehicles opened fire standard weapons – 30 millimeter cannon. It is unclear why, out of the blue. It was quiet,” says one of the defenders of Marinka. In response, the soldiers of the battalion “Donbass-Ukraine” opened fire permitted by the Minsk agreements of weapons. And managed to get to the hideout, where the militants had stored ammunition. “Was BC – all detonated. Was a very bright flash up in the morning all that was burning. It was not necessary to touch,” says one of the soldiers “Gaiduk”.

The Russians reinforce their positions in Donetsk oblast sniper groups. A new batch of “lost” the gunmen arrived in Donetsk. The enemy dig in Maryanka last time approached to 80 meters and tried to throw grenades at our vantage point. The guys have driven away the intruders, but in the morning began to work the sniper of insurgents.

Terrorists are angry. They continued the attack, and also attacked the positions of AFU. Saboteurs crept up very close towards the Ukrainians. “Worked with silencers. Tried to remove “Dashka” because it is such a good car that’s stopping them,” – said the fighter with the Callsign “Wind.” Fighters of “Donbass” the intruders drove away. Then, according to the defenders of Ukraine began to shoot the sniper.

But the military did not even pay attention, because it is already used to living under fire. Much more attention is paid to the local pet – dog Grey. The soldiers are saying that the dog was born in war and bullets are also not afraid. They are very well protected areas and immediately alerts you to the approach of separatists.

In General, during the day in the ATO zone was recorded 16 attacks by the Russian occupation forces. Militants opened fire on the ATO forces ‘ positions near Maryinka, Novozvanovka, Novoaleksandrovka, Gotovogo, Pavlopol, Shirokino, while used small arms, heavy machine guns, grenade launchers and BMP.