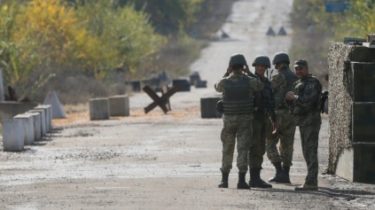 Fighters 47 times broke “the silence mode” for the last days.

For the last days fighters 47 times opened fire on positions of Ukrainian military. This is stated in the summary of the press center of staff ATO as at 6.00.

So, on the Mariupol direction was held on 27 attacks. Armed provocations by the enemy took place with heavy weapons. In particular, from barreled artillery 152 fire at the defenders of Talakovka and Berdyansk, and 122 calibre — at Shirokino. In addition, under fire from mortars appeared at the position of ATO forces in areas of Water, Szerokiego, Marinka, Talakovki. Towards Pavlopol and Gotovogo attacks of the Armed Forces of Ukraine was carried out with the use of weapons of BPM, grenade launchers, machine guns, small arms.

In addition, the direction of Lugansk recorded 17 violations of “silence mode”. The enemy fired at the Novozvanovka, Novoaleksandrovka, Popasna with weapons of various calibres, increasing the intensity of the fire mortars 120 and 82mm.

Also at the Donetsk direction the militants of the 3 times fired at the ATO forces.

We will remind, recently in Marinka terrorists unexpectedly with two infantry fighting vehicles fired at positions of the Ukrainian military. Our soldiers believe that it was the Russians celebrate the birthday of their President.

Near Mariupol and on the outskirts of Avdeevka fighting continues, there are victims

The military has already reported one dead and dozens wounded. A new batch of “lost” the gunmen arrived in Donetsk. The enemy dig in Maryanka last time approached to 80 meters and tried to throw grenades at our vantage point. The guys have driven away the intruders, but in the morning began to work the sniper of insurgents.