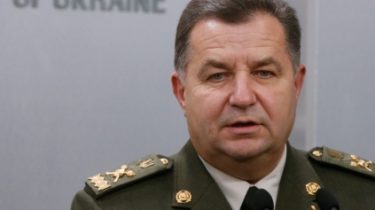 According to him, negotiations need to be conducted with the leadership in Moscow.

The Minister of defence of Ukraine Stepan Poltorak called the visit to the people’s Deputy Hope Savchenko temporarily occupied territories of Donbass it personal.

Noting that need to communicate with those who started the war against Ukraine, this Poltorak stated today, on 13 October, UNIAN reports.

“I think it’s a personal thing MP… I think that in order to negotiate (I don’t know who it was Hope in Donetsk, Lugansk), but I know that in Donetsk, Lugansk not those who started this war,” – said the Minister, referring that negotiations need to be conducted with the leadership in Moscow.

We will remind, people’s Deputy of Ukraine Hope Savchenko, speaking in the session hall of the PACE, said that recently visited the occupied areas and spoke with people who were planted.