Yanukovych received orders to disperse the Maidan, after a meeting with Putin in Sochi. 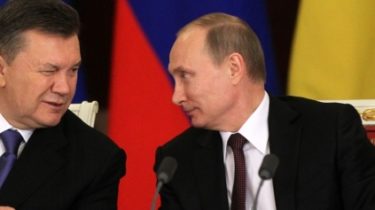 Yanukovych received orders to disperse the Maidan, after a meeting with Putin in Sochi.

He said this after being questioned at the Prosecutor General’s office.

Former President Viktor Yanukovych during the dispersal of activists on the Maidan were guided by the orders of the President of Russia Vladimir Putin.

This was stated by the head of the “popular front” Arseniy Yatsenyuk after the interrogation in the Prosecutor General’s office, reports Еспресо.TV.

2/2Вважаю that the behavior of the former regime changed dramatically after meeting Yanukovych and Putin in Sochi.It was 2тижні to the shootings on the Maidan

“Two weeks before the bloody events of dispersal of the Maidan was the meeting of Yanukovych with Putin. And, according to our information, the Minister of internal Affairs Zakharchenko and the head of the security service Yakimenko was instructed by Russian intelligence agencies to urgently prepare a plan for the dispersal of the Maidan shootings,” – said Yatsenyuk.

The former Prime Minister added that such a plan was prepared with the support of Russian security forces, who received the first draft of this plan, was skeptical, because then Ukraine was not specialists in these bloody operations.

Earlier, the PGO said that the activities of ex-President Viktor Yanukovych for the post was subordinated to the interests of the Russian Federation in matters relating to national security.