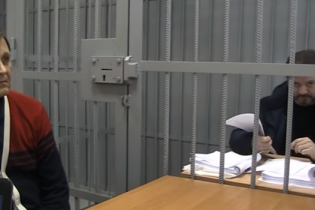 The main witness said that Efremov and Medyanik knew in advance about the capture of Lugansk Russian.

In the Internet appeared the video cross-examination of the former people’s deputies from Party of regions Vladimir Landik and Vladimir Medyanik. Both involved in “the case of Ephraim”, but Landik acts as a witness, and the Medovik is one of the suspects, who is now in jail.

During a confrontation Landik said that the former head of fraction of regionals Alexander Efremov know in advance that Lugansk will be captured by the Russians. In his opinion, Medyanik, too, could know about it, because after the parliamentary election in 2012, he

was part of the “ideological and factional team Ephraim”.

“This I know from the mouth of the then Governor of the Luhansk region of Pristyuk, which me about it directly said, “Yes, they will come”. Logically I can assume that Vladimir (Medyanik) might know, too. Me he no say”, said Landik.

See also: For the creation of “LNR” detained not only Ephraim, and Medianik.

He also said that the apartment Ephraim was the meeting, which was attended by adviser to the Russian President Sergei Glazyev.

“It was at home in Ephraim. There was also the immediate environment of Ephraim, Golenko, pristyuk, Lozovsky. There was discussed the question of admission of Russian troops on the territory of Ukraine, the separation of the territory of Donbass in favor of Russia. These entrepreneurs, as I such a whole lot – chase, kill, and divide among the “inner circle”. I am told that I myself was not present there”, said Landik.

Subsequently, the TV channel “112 Ukraine” Landik said that the publication of this video is “pressure” on him.

“The pressure on those testifying, because nobody is going to give any testimony. As I second time to call, I say, “goodbye.” Was intimidation with hints. If you can do that before it gets around, tell me what we were going to interview, but it can be publicly shown to all. Then people turn around and say, “goodbye, Sami talk”. Because it’s my job, to go or not to go. When you do, this is to ensure that people do not go. It was the Prosecutor’s office,” he said.

See also: Ex-MP Landik confirmed that Yefremov was the organizer of capture of administrative buildings in Luhansk

The representative of the Prosecutor General Petro Shkutyak failed in a commentary channel to explain how the video got to the Network. He said that is on leave and to provide comments will not before 17 Oct.

Defender Vladimir Medyanik Kim Veremiychyk said that this video he has, but denies that he was involved in the fact that the video has hit the net. However, Veremiychyk believes that the leaked video does not harm the interests of the investigation.

Recall that Ephraim was detained at the airport “Borispol”when he tried to fly to Vienna. He is suspected of infringement of territorial integrity and inviolability of Ukraine, namely – involvement in the creation of so-called “LNR”. It is noted that the former regional can still bring charges of financing terrorism.

Note that Ephraim was already arrested twice for speaking in the Parliament, which, according to investigators, showed signs of separatism and participation in the adoption of “draconian laws”.