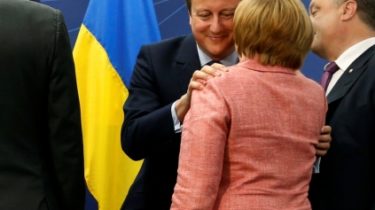 Ukraine is ready for the meeting of the leaders of the “Norman format”, but provided its efficiency. This was stated by the head of state Petro Poroshenko during the briefing in Kharkiv, where the President is on a working visit.

“We constantly stress that we are ready for this meeting, but the key position that this was not a meeting for the sake of meeting. We need to develop the agenda and projects of decisions,” he explained.

Poroshenko added that he intends in coming days to discuss the matter with German Chancellor Angela Merkel and French President Francois Hollande. “Tomorrow, or on Monday morning held a telephone conversation with Chancellor of Germany and President of France and, if we see the future, we are ready at any time to collect this meeting, if Russia is willing to fulfil the obligations assumed in the safety package “, – said the Ukrainian leader.

Read also: Merkel called for a joint dinner of the leaders “channel four”

He also added that it plans to withdraw the country from the Minsk negotiation process, despite all the difficulties and criticism. “If someone, knowingly or unknowingly working for the aggressor country, insists that Ukraine has independently initiated a withdrawal from the Minsk process, it is something just waiting for the Russians: they say, look, they do not comply, they are irresponsible. And then – let’s remove the sanctions against Russia, let’s not hold her accountable… It’s a dead end,” – said the head of state.

On the eve of his vision of prospects to gather the leaders of the “Norman format” expressed in the German government. Merkel believe that the meeting be held “in due time”.

Merkel, Hollande and Putin discussed the terms of holding the summit in “Norman format”

On the website of the Elysee Palace said that politicians discussed the terms of holding the summit in “channel format”. Earlier, the Russian Ambassador in France said that Merkel invited the leaders of the Norman Quartet for dinner in Berlin next Wednesday. This day was the scheduled visit of Putin to France that the head of the Kremlin was cancelled.