The insurgents focused on attacks in the area of Lugansk and Mariupol. Chronicle of the ATO 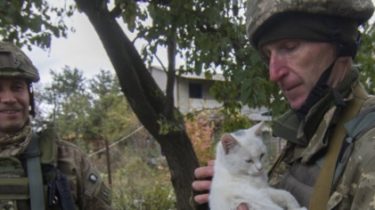 The insurgents focused on attacks in the area of Lugansk and Mariupol. Chronicle of the ATO

The Ukrainian military in the ATO zone© UNIAN

During the day, the Ukrainian military counted 23 enemy fire.

In the course of the day, October 15, in the area of ATO in the Donbas the militants fired 23 times on Ukrainian positions.

This is stated in the summary of the press center of the ATO headquarters as at 18:00 on Saturdays.

Most attacks were in Lugansk region – 12.

“In particular, in the area of Novozvanovka by militants on Ukrainian positions has occurred shelling of artillery 122-and 152-th calibers. In Popasnaya from 82-mm mortars and small arms, and near Novoaleksandrovka – mortars both caliber”, – said the press center.

See also: a day in the area ATO wounded three soldiers, one suffered a concussion

Near Mariupol Ukrainian military has recorded eight attacks by the militants.

“Under fire from 120-mm mortars hit the positions of the ATO forces in Maryinka, Shyrokyne, Krasnogorovka. In addition to large caliber weapons, the enemy used machine guns and small arms”, – stated in the message.

In Donetsk direction was three fire.

“In the area of Trinity, Avdeevka and Novgorod occupants fired at positions of the Ukrainian defenders of grenade launchers of various systems, machine guns and large caliber small arms”, – said the press center of staff ATO.

We will remind, today in the zone ATO was the President of Ukraine Petro Poroshenko.