The President of Ukraine in the ATO area 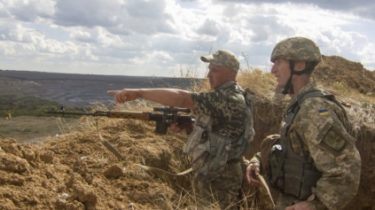 The President of Ukraine in the ATO area

Poroshenko plans to meet with the military, who are preparing for demobilization of the “sixth wave”.

The President of Ukraine Petro Poroshenko arrived in the area ATO. There he was informed about the professionalization of the Armed forces of Ukraine and the gradual replacement of the mobilized military contract and rearmament.

It is reported by UNIAN referring to the press Secretary of the head of state Svyatoslav Tsegolko.

In turn Poroshenko on his page in Facebook said that “arrived in the ATO area to personally congratulate and present the high state awards to the military that in the sixth wave of demobilization will soon be back home.”

Petro Poroshenko believes that Ukraine today is a rebirth of this state. He said this during a meeting with the military.

“Today, we have a newborn army, and I stress the newborn state, he said. – 25 years ago independence we fell from the sky, today she (Ukraine) is the rebirth of the state, Patriotic, strong, motivated and highly mobilized”.

In the Armed forces of Ukraine continues the reform of food security.

“The army fed, we continue the reform of the food provision for the Armed forces of Ukraine”, – said Poroshenko.

In addition, the President noted that the army raised the level of medical care, and also assured that the Ukrainian government will fulfill all orders for the provision of benefits to participants of combat actions.

Poroshenko recalled that, since 1 January, the ranks of the armed forces have already signed up more than 57 thousand contract.

Read also: Poroshenko announced the incredible number of soldiers who took part in the ATO

“Today, you are the last sixth wave of mobilization of the soldiers who were mobilized for military service in 2014-2015. The adoption of such important decisions on dismissal became possible due to successful implementation of the APU tasks in the professionalization of forces, and the gradual replacement of the mobilized military contract”, – stated the head of state during a meeting with the military in the ATO zone.