Among the militants near the Town suddenly appeared in Ukrainian 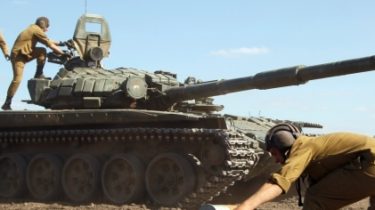 Among the militants near the Town suddenly appeared in Ukrainian

Military joke that the Russian military was tired of fighting in the Donbass.

Ukrainian military near Avdeevka have a relative calm in recent days. Despite this, the soldiers kept on alert and in a stable ceasefire do not believe, said in the story TSN.19:30.

“There is just trench warfare. Out of the trench into the trench,” explains the fighter with the Callsign “Old”. “To militants a distance of approximately 50 metres,” adds soldier Nikolai. “They give – we give you the answer. And all” – describes the course of events “Blacksmith”. The last few days Ukrainian soldiers believe quiet. Explain: after the fire the response from the APU fighters lose interest in the action. “They start firing, we give an adequate response – and they are fading. Day can remain silent,” said one of the defenders of the Town.

The military reported the appearance on the enemy positions Ukrainian militants

In the vicinity of the Town suddenly silenced the enemy artillery, however, the defenders of the local industrial area, especially not relax, because I know what usually ends any silence. Moreover, small arms, grenade launchers and the enemy does not stop. Run by a bunch of militants solely Russian fighters tell, although recognized, it happens that there are even Ukrainian.

In his spare time, the soldiers eat in the gardens ripened grapes, drink in the fresh air of coffee and enjoy every free from attacks. And also listening to the intercepted radio conversations of terrorists and celebrate them unexpected changes. “The commanders have them, when something begins, give orders, heard Russian speech of the net. There are many people who speak the Ukrainian language. I don’t know if Russian personnel already tired to fight here, not knowing for what and why,” says Mat soldier with the call sign “Brother.”

However, Marines in a sudden peacefulness of fighters don’t believe, so keep on the lookout. “Sooner or later the silence ends with one fight,” conclude the defenders of Ukraine.