Deputy Dekanoidze in awe of the new cyberpolice 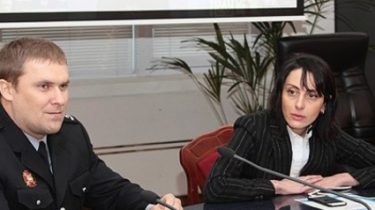 Deputy Dekanoidze in awe of the new cyberpolice

The head of the criminal police said that may improve her work.

Deputy head of the National police of Ukraine receives a salary of 58 thousand UAH. This was stated by the head of the criminal police, Vadim Troyan, says the story TSN.19:30.

He confessed to wages, when he talked about his rifle, which cost 44 thousand hryvnias. “When we went to war, we don’t all know how to shoot. But they quickly learned. Every man, I think it’s in the blood. But I’m not a hunter. I’m only at inanimate targets or at the enemy,” – said the Deputy Dekanoidze.

Hackers-police and against criminals: Vadim Troyan spoke about the challenges and successes of the police

The head of the criminal police and the Deputy of the Charter Dekanoidze told about the fascination with guns and the success of his wife in pistol shooting. A man spoke about the success of the police in dealing with offenders and declassified the amount of wages patrol. Vadim also said that now one of the progressive believes Departament of cybercrime, and he lays great hopes on him.

Trojan recognized that the biggest problem of modern detectives – petty theft. “Previously, for example, stole the girl’s phone. Any operative could order the monitor for an hour and he already knew where this phone is sold. And now you’re reading, you come to the investigator, he writes the resolution, go to the Prosecutor, he signs, then to court – and then only consent to monitor the phone. The time we go to months,” – said the head of the criminal police.

He expressed the hope that the Minister of internal Affairs and the Prosecutor General will support the police in the issue of legislative changes and will lobby the new procedure. “When we give this tool, it will be very easy. And all these street crimes with tablets, phones – the disclosure will be for the day,” – assured the Trojan.

In his opinion, the deterioration of a criminogenic situation in Ukraine, the reform of the interior Ministry not to blame. The old staff left the authorities not so much as it seems. “We only have new patrol police officers,” he says. He adds that the system works predecessors could not withstand criticism. “We was in MIA a plan to intercept. I ask the generals, but in 25 years how many times the plan-interception work? The generals laugh: never” – said one of the leaders of the NHRI.

Trojan admitted that he dreams in his unit for another 5 thousand operatives, as well as legislative changes that would facilitate the work of the police. Law enforcement also said that he was proud of the new police units. “The coolest we have a unit that I have created, this Department of cybercrime. There are hackers who can go where they want. Already 280 people such operatives. And crimes – 500 episodes proved. They work great, I like it. And I think that in the future cybercrimes will be one of the main tools in General, disclosure of any crime”, – admitted the chief of the criminal COP in the country.