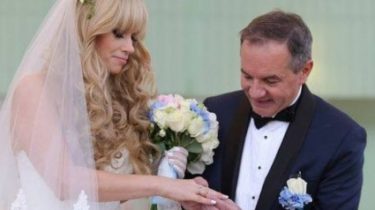 Michel Tereshchenko Elena Eskina met a year and a half.

A descendant of the aristocratic family of sugar manufacturers and philanthropists, 62-year-old mayor of Glukhov in Sumy region, Michel Tereshchenko married 24 years younger than the former honorable city Council, and now the activist Elena Eskinol. Romantic relationship lasted a year and a half.

The wedding took place in Kiev. The official part in the Central Palace of weddings. This is stated in the plot of TSN.19:30.

Neither vows nor marriage contract – so decided Michelle Tereshchenko. Between him and his wife – no obligation, only love.

“I took her husband’s name. This for me was a very difficult choice because my last name is my brand and it was very difficult to change,” said Elena.

In bright embroidered shirts – mom and grandma Elena. Children and mother Michel, in classic black outfit, they are in Ukraine arrived in the night.

From Racsa the couple went to pink retro limousine in the Vladimir Cathedral of the Kyiv Patriarchate. Rent one hour of the car is 950 UAH. View of the lush ceremony near the Cathedral are going to not only invited guests, but strangers. To get married in the temple, the couple decided because when it was built by the ancestors of Michel Tereshchenko. Therefore, the ceremony is conducted by the rector father Borys.

Giving gifts, the guests began immediately after the wedding, right in the temple. Mainly icons, money, and household stuff.

Then two hours boat trip on the Dnieper, a little dinner for my nearest and dearest. And on Monday, recognized the couple for their honeymoon. You fly to Miami and then to the Islands closer to the sea. At the time the “honeymoon” Michelle Tereshchenko took a vacation.

A descendant of Europe’s largest sugar barons and patrons, the mayor of Glukhov and the former honorable city Council member Elena Eskina became husband and wife. She is in the classic dress of European style with the heavy plume, he is in a suit. Neither vows nor marriage contract – so decided Michel Tereshchenko, between him and his wife no obligation – just love.