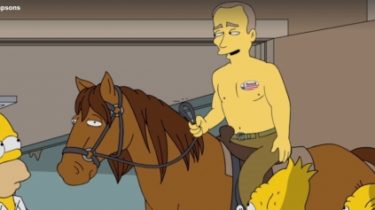 The creators of the series made fun of the Russian President.

The creators of the series “the Simpsons” made fun of Russian President Vladimir Putin and his cozy relationship with the candidate in presidents of the United States Donald trump. Two-minute episode per day was viewed more than five million users of Facebook.

In the video dressed in American Putin campaigning for trump and vote for him in the election. And after the vote appears scantily clad on the horse and declares that “his (Putin’s) hackers will arrange a Trump win with 102% of the votes, because business is business”.

Earlier the candidate in US presidents from Republican party said that if he wins the election he will be “very good relationship” with Russian President Vladimir Putin and with Russia. Then trump changed course and statedthat Russia has violated the agreement with the United States about a ceasefire in Syria and that this country does not respect the leaders of the United States.

Answering the question about “love for Putin”, trump said that relations with Russia will depend on her reaction to the change of leadership of the United States.