The temperature of the hryvnia. What happens in the currency market and where is causing the prices in the shops 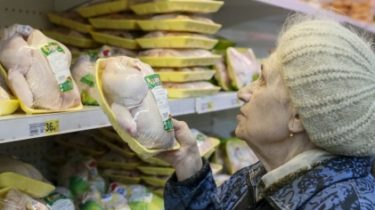 The temperature of the hryvnia. What happens in the currency market and where is causing the prices in the shops

Chicken is on par in price with the pork.

Dollar in Ukraine for several weeks, the indestructible worth at around 26,10 hryvnia. The Euro even fell slightly – from 29.30 to 29.15 UAH UAH at the end of the week.

These courses will continue, says Vice-President of the Independent banking Association Elena Korobkova. But the risks are still there – the national Bank will soon have to convert their profits to the state budget, and this can lead to the appreciation of the dollar on the market.

Meanwhile, from 1 October the government gave up control over the prices for social products. Eggs have risen in price almost twice. This is explained by the fact that eggs in Ukraine was less, because the production fell by 20%. Secondly, 65% of the price of eggs is feed. And they are much more expensive, because a lot of fodder Ukraine exports. Another factor is seasonality: chickens in the fall corny less rushing. Therefore, manufacturers have raised prices by 40% at once.

With chicken , same thing. In addition to the expensive food this year was a record for the export of Ukrainian chickens export. This was stated by the Union of poultry farmers. Ukrainian chicken went to Africa and Asia. The result – the chicken has already caught up for the price of pork.

And this despite the fact that the price tags on pork also went up. According to the Association of pig producers, although their products are also subject to state regulation, but never to him not paying attention. Its price was influenced by the seasonality of demand and the cost of feed. Therefore, reducing wait not worth it. And the next major leap will be on Christmas holidays.

Will not be able to save on dairy diet. And it’s getting worse, I assure dairy producers. In addition to the seasonal decrease of milk yield and decreases milk livestock. And play it – it is long. The shortage of milk has led to deterioration in the quality of the whole milk. In addition, milk production – high share of electricity. And the rates for steel producers is higher than in Europe. So at the end of the year all of the milk will rise in price percent on 10.

Sugar started to go up in September – added hryvnia per kilogram. But will no longer be assured “Ukrsakhar”. After all, a lot of sugar.

TSN constantly monitors prices in supermarkets. In September, check for eggs, chicken, chicken, the cheapest pork, milk, cheese, sour cream, butter and sugar was just over 257 UAH. Now, in October, a similar bill is already 290 UAH. That is two weeks food basket has risen by 33 UAH.

The hryvnia is still in the position 26,10 for a few weeks. Euro improved its image from 29.30 – to 29.15 at the end of the week. The change in the exchange rate and the government’s refusal to control the prices for social products has caused price changes on the products required. TSN has compared the prices of milk, sugar, eggs and other products in September and October.