Car wash, titushky and murderer of prisoners: the basic facts about militant “Motorola” 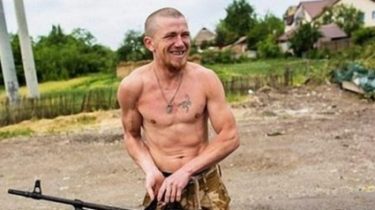 Car wash, titushky and murderer of prisoners: the basic facts about militant “Motorola”

Arsen Pavlov was blown up in the Elevator.

October 16, 2016 in Donetsk killed one of the raspiarennyh and most violent militant groups “DNR” Arsene Pavlov, better known by the nickname “Motorola”.

According to preliminary information, Pavlov exploded in the Elevator of the housewhere he lived with his wife and children. One of the leaders of Donetsk separatists Denis Pushilin said that an improvised explosive device, except “Motorola” injured several people. In “DNR” the murder of the gunman accused of some “Ukrainian sabotage-reconnaissance group”, the interior Ministry of Ukraine the responsibility for this lay not his accomplices.

Arsen Pavlov was born in 1983 in Ukhta, Komi Republic. According to the fighter, he’s 15 years lost his parents and was raised by his grandmother. He served in the Russian army Communicator (hence his nickname – “Motorola”), according to some information, participated in the second Chechen war. After service he returned to Komi, got married, had a son. Subsequently, he moved to Rostov-on-don, where he worked as a car wash. In 2012 allegedly prosecuted for stealing a car while intoxicated.

What are you doing in Ukraine, Russian professional military

The Ukrainian Donbass became a landmark for many of them – here they became big chiefs, gained notoriety abound, and some even married. The question is only why these people came to destroy another country.

With the beginning of Russian aggression in Ukraine in 2014 “Motorola” left his wife and 5-year-old son and went to the Donbass, where he joined the band of Igor Girkin. There he met his new wife – a 21-year-old Elena Kolenkin, in 2015 they have a daughter, and two weeks before the death of the gunman, the son.

Such generosity of her husband boasted of his wife, laying in the social network photos. And this is not the only profit of the militants. While the inhabitants of the occupied territories do not have enough bread, the former commander of the DNI Girkin goes on a luxury Mercedes.

The militant “Motorola” in March 2014, pretended to be disgruntled “junta” Kharkiv. The video from the rally of supporters of the “Russian world” from March 16, 2014 is seen as “Motorola” was standing behind the orator, who urged Putin to send troops to Kharkiv. The gunman said nothing, but carefully watched the crowd of protesters. Pavlov appears in the video at 5.55.

Pavlov led he created the battalion “Sparta”, which participated in the battles of Slavyansk, Ilovaisk, Donetsk airport and debaltseve. “Motorola” was distinguished by its brutality and “frostbite”: the Internet is a video of him for fun shoots from a grenade launcher on his.

And Pavlov was shot by a Russian volunteer, who brought bulletproof vests to fighters from his gang. It happened when a volunteer was wearing a bulletproof vest that Motorola could experience. A bullet fired by a terrorist from the gun passed through the armor and stuck in the belly of the volunteer with the “dog” from lightning.

The terrorists brought the armor, and made it possible to test the product for yourself. Quality failed, the bullet went through the armor and stuck in the belly of a Russian.

In February 2015, the SBU opened against the terrorist criminal case under the article 438 of the criminal code of Ukraine (violation of the laws or customs of war) for the term up to life. “Motorola” was declared wanted. The President of Ukraine Petro Poroshenko then said: “This monster will be brought to justice. He is responsible for the death of a Ukrainian hero.”

Interpol has refused to declare the “Motorola” wanted

In June 2016, the Interpol has refused to declare the “Motorola” in the international search.

“Interpol gave us back our documents with the motivation of the political nature of the case Motorola. We do not understand this. He shot in front of witnesses Branovitskiy we have he is a suspect and there is a court decision on his arrest,” – said Deputy chief of the head investigative Department of SBU Vitaly Beacons.

Interpol refused to Ukraine in search of militants DNI Motorola

This was reported in the SBU. Arseniy Pavlov suspect in the murder of the captured Ukrainian military, the defender of the Donetsk airport Igor Branovitskiy. Interpol, called the case “politically motivated”, despite the fact that the murder “Motorola” made in front of witnesses. And he boasted that shot 15 prisoners.

The assassination and “death” “Motorola”

Media, users of social networks and even some Ukrainian officials many times “buried” Arsen Pavlov, but it all turned out to be rumors. A few times, “Motorola” was wounded, and in June of 2016 received a wound in the left eye.

24 Jun 2015 for militants was assassinated when he left the hospital after ligation. Explosion of a land mine, damaged seven cars, two buildings of the hospital were broken but nobody was hurt.