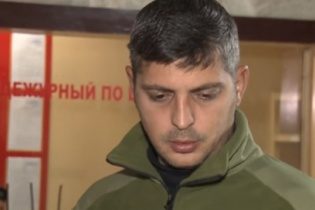 In fact, a terrorist accused of killing the leader of the “Sparta” all the Ukrainian people.

One of the leaders of DNR group Mikhail Tolstoy, nicknamed “Givi” has promised to raze the Ukrainian city over the death of his friend Arsen Pavlov (“Motorola”).

“Whoever did it will be hard to pay the whole of Ukraine. Each city after the “Donetsk people’s Republic”, which we will tackle next, I’m going to level with the ground for this friend,” said “Givi”.

See also: the Expert explained why the murder of “Motorola” profitable for Russia

We will remind that one of leaders of fighters of “DNR”, the leader of the gang “Sparta” Arsene Pavlov, nicknamed “Motorola” was killed on the evening of 16 October. It blew up in the Elevator of the house where he lived. In the group “DNR” in the murder of Pavlov blamed “Ukrainian sabotage-reconnaissance group”. Motorola was one of the most cruel militants “DNR”. In particular, he shot the prisoner Ukrainian military Igor Branovitskiy. Pavlov himself admitted the killing of 15 captured soldiers of the Armed forces of Ukraine. In Ukraine he was declared wanted.