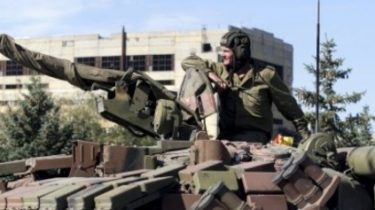 In the direction of Donetsk have been 3 attacks on Ukrainian positions.

During the day in the area of counter-terrorism operations by the Russian occupation forces recorded 18 cases of opening fire on positions of Armed forces of Ukraine.

On the Mariupol direction had been 13 attacks. The defenders Talakovki the enemy used mortars of 82 and 120 calibers, weapons BMP. Tube artillery of 122mm calibre, mortars of calibers both were involved in Shirokino and Water, and in Novotroickoe the invaders used small arms.

In Lugansk direction there were 2 armed provocations against ATO forces. In the direction of the Armed Forces of Ukraine in Novooleksandrivs the enemy fired from grenade launchers, machine guns and small arms.

See photos: Militants in the Water destroyed the street and injured an elderly woman

Earlier it was reported that the observers of the special monitoring mission of the OSCE came under fire in the area of the observation point of the Golden region. None of the patrol was injured.

Residents of Popasna recovering from a powerful attack by militants

On the eve of the city Popasnaya militants fired from barreled artillery and mortars. Clinic after shelling 122 caliber riddled with: on broken Windows does not even have time to remove the protective film, the gas pipeline is killed broken wires and beaten with shards of house – more proof of the fact that the shot is not in the military, aiming at civilians.