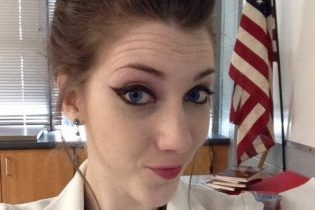 In November on it to begin the trial.

In the United States 24-year-old teacher Mary Beth Haglin, which was engaged in sex with his student, claims that he seduced her. In an interview with the American channel, she said that was the victim.

Mary confessed that she had sex with 17-year-old boy almost daily for six months, writes the Mirror. She also sent him salacious selfies.

It is noted that after the incident she was fired from the school. And then she got a job as a dancer in a strip club. Mary admitted that she was vulnerable after a breakup with her boyfriend, and the student used this to their advantage.

“At first I ignored his advances, because he knew that it was unlawful,” said Mary.

In addition, the teacher said that she tried to end their semi-annual sexual relations, but the teenager had threatened to upload her Nude photos if she leaves him.

According to Mary, their relationship ended after another student saw them together.

In November on it to begin the trial. She is accused of sexual exploitation of minors.

We will remind, earlier vchitelka biology 24-year-old Markita Elston was arrested on charges of sexual harassment to the high school students in Tennessee. Prosecutors allege Alston had sexual intercourse with five 17-year-old boys in the period from September to November 2014.