Groisman came up with an alternative to subsidies for Ukrainians 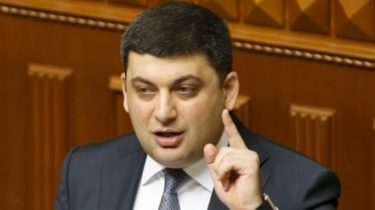 Groisman came up with an alternative to subsidies for Ukrainians

Prime offers a 12-month installment plan for the payment of utility bills.

Another misunderstanding with subsidies occurred at the beginning of the heating season. As it turned out, budget subsidies are reduced by half, and all the money saved by consumers in the past year, money officials returned to the state, according to a story TSN.19:30.

An old hut in village Kopylov, Kiev region Natalia going to gas town with her husband and two children received from their parents. On her heating last winter, the family received a cash grant equivalent to 600 cubic meters of gas per month. All blue fuel family is not used. Sometimes stoked with wood to spare. For this installed a solid fuel boiler. The room temperature was kept above 20 degrees. Thus, for the whole heating season on account of Natalia has accumulated 8 thousand hryvnias. The woman says that the saved money is planned to spend for warming a house, but they just took. “Of course, we didn’t like it. A sense to save, say? People now would not make sense to save money and especially if you cut the limit – people simply will not fit into these norms. Now will become everything more difficult,” – said the hostess.

Current subsidies on heating gas and electricity has reduced by half

All saved consumers at last year’s heating season, the money was returned to the state. People claim that they’ve been robbed. Officials say that the funds of the state. While some consider the losses others correct the mistakes.

The Director of the Department of state aid Ministry of social policy Vitaly muzichenko says that subsidies are not appointed on the actual volumes of consumption, and the so-called social norm. Last year it was grossly overstated, and the winter was warm, hence the overpayment amounted to more than 15 billion hryvnia. In April this year by the Cabinet decision , these funds returned to the state. “Sorry, it’s the budget. It’s taxpayers ‘ money. If we gave them $ 15 billion now, then we would at year end have somewhere else to look for the resource. Who? Take those same pensioners with pensions, right? The public sector wages?”, – asks the official.

Now the money saved can be carried over to the next month, but only during the heating season. If the heating is private, the money will be stored until next winter. Experts say that people had incentives to save, it is necessary to replace subsidies with cash compensation. Then monetized savings can be used on the goals that the person wants, which saved money and energy.

The Ministry of social policy claim that has been working on this issue. At the same time, the Prime Minister Volodymyr Groysman suggested alternatives. “We will implement a 12-month installment to pay for housing for those who do not wish to receive the subsidy. So we have two mechanisms that can be used: grant, targeted assistance permanently, and on the other hand, if this is not an option for whatever reason, please consume today and pay in 12 months”, – said the head of government.

As reported in September, the Cabinet complements and changed the rules regarding the design, accrual, modification and cancellation of subsidies for payment for housing and communal services. From now on Ukrainian families in whose homes register new residents, abolish the automatic recalculation of subsidies and in General this benefit. Subsidies will be abolished from next month after registration of new residents. To receive this benefit in the future, these families will have to apply for registration again.