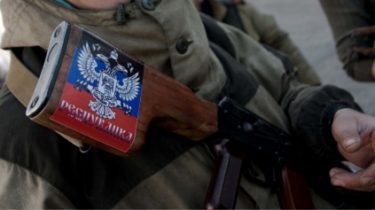 Terrorists fired about 30 min of caliber of 120 mm.

The militants of the terrorist organization “DNR” fired at the checkpoint “Hnutove”, located 23 km East of Mariupol.

About this In Facebook wrote press Secretary of the State border service of Ukraine Oleg Slobodyan.

See also: near Mariupol, the military received another evidence of the presence of Russian troops in the Donbas

As a result of the shelling damaged houses, standing along the KPVV. Losses and wounded among the border guards there. They return fire was not opened.

Earlier it was reported that on 18 October in the area of antiterrorist operations recorded 35 attacks by the Russian occupation forces. At the same time on the Mariupol direction the enemy 30 times opened fire on positions of Ukrainian Armed Forces, most of which are heavy weapons.

At least six injured is the result of attacks of fighters for the last days. A day in the Donbass, according to the correspondents of TSN, the Ukrainian soldiers with combat injuries have been brought. From midnight to 18:00 p.m. in the area of antiterrorist operations recorded 35 attacks by the Russian occupation forces.