Hollande can Putin discuss Syria at a meeting in Berlin – media 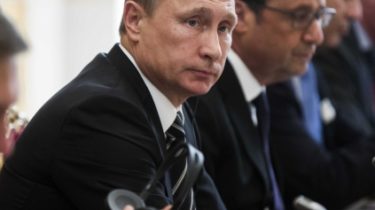 Hollande can Putin discuss Syria at a meeting in Berlin – media

French President Francois Hollande intends to discuss with his Russian counterpart Vladimir Putin on the sidelines of the summit, “Norman four” in Berlin the situation in Syria.

It is reported RIA Novosti citing a senior source in the French leader.

“In addition to the summit in “Norman format” will be held a trilateral meeting Hollande and German Chancellor Angela Merkel and Ukrainian President Petro Poroshenko on the situation in Ukraine and another with President Putin on Syria,” — said the Agency interlocutor.

Earlier Tuesday, the press Secretary of the President Dmitry Peskov confirmed that Vladimir Putin will arrive on 19 October in Berlin for a meeting “Norman Quartet” with the participation of Hollande, Merkel and Poroshenko.

Read also: Putin with Merkel and Hollande discussed the situation in Ukraine and Syria

We will remind that earlier the President of France Francois Hollande said that now is not the time to celebrate, because refused Russian President Vladimir Putin at the opening of the Orthodox Church in Paris.

In addition, the publication notes that the head of France wished above all to discuss with Putin the situation in Syria. So Hollande told Russian leader that will not be joining him at the opening of the Orthodox Church of the Holy Trinity in the French capital.

Meeting in Normandy format will be held in Berlin tomorrow. About it in telephone conversation have agreed, Petro Poroshenko, Angela Merkel and Francois Hollande. About the participation in negotiations of Vladimir Putin on the website of the Ukrainian President is not mentioned. But, according to the representative of the German government, the head of the Kremlin in Germany still going.