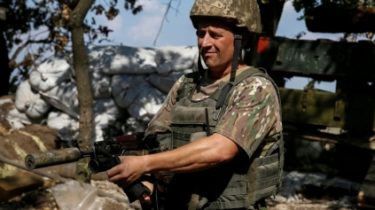 Over the past day militants 57 times opened fire at positions of the Ukrainian defenders. This is stated in the summary of the press center of staff ATO as at 6.00.

So, on the Mariupol direction the enemy 44 times broke “the silence mode”. Militants fired machine guns of large caliber, rocket-propelled grenades and small arms to strengthen the Armed Forces of Ukraine near Talakovka, Pavlopol, Granite, Krasnogorovka and Marinka, and on Water, Lebedinsky and Shyrokyne at that time was applied to the fire of cannon artillery of calibers 122mm and 152mm, mortars of 82mm and 120mm caliber.

In addition, in Lugansk, the enemy 10 times broke “the silence mode”. In particular, on the Ukrainian positions, the enemy opened fire in the areas of Popasnaya and Nutty rocket-propelled grenades, machine guns and small arms, and in Novozvanivka and the Crimean division of the Ukrainian Armed Forces were fired from mortars 120 caliber.

We will remind, earlier it was reported that the militants of the terrorist organization “DNR” shelled checkpoint “Hnutove”, located 23 km East of Mariupol.

At least six injured is the result of attacks of fighters for the last days. A day in the Donbass, according to the correspondents of TSN, the Ukrainian soldiers with combat injuries have been brought. From midnight to 18:00 p.m. in the area of antiterrorist operations recorded 35 attacks by the Russian occupation forces.