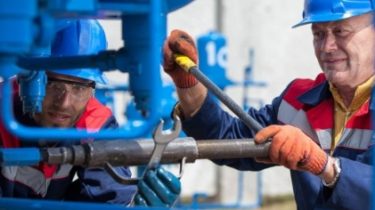 Ukraine stocked for the winter 14.7 billion cubic meters of gas.

“Ukrtransgaz”, which is subordinate to the “Naftogaz of Ukraine”, should be pumped into underground storage, at least 17 billion cubic meters of gas for the normal passage of the heating season the period of 2016-2017 years. Such requirements previously set by the Cabinet.

In an interview with the “Economic truth”, said the Minister of energy and coal industry Igor Nasalik.

“14.5 billion (cubic meters of gas pumped into storage a week ago) is that volume which is enough for the warm season, when warm winter. The meteorologist gave us approximate information, which show that this year winter will be colder than in the past. Not enough. Therefore, in our calculations up to this amount we added another 1.5 billion cubic meters on temperature. And 1 billion is a margin of safety in case of force majeure with supply of anthracite,” explained Nasalik.

As of October 18, according to “Ukrtransgaz”, in the underground storage pumped 14 billion 723 million cubic meters of gas and the rate of occupancy was 47%.

Read also: Cabinet called the terms of connection of houses to heating. Kiev – in a priority

“I did a separate meeting, after which it became clear that our ports provide the ability to handle up to 600 thousand tons of coal, but land logistics has not been established so the entire amount can be taken. Therefore, 1 billion cubic meters (of gas) we took in the event that was to raise gas and fuel oil CHP-units. But this is an extreme situation – just in case, on the one hand, the shipment from the zone ATO will stop at all, and on the other hand, coal from abroad will not be able to be delivered in the right amount,” – said the Minister.

At the same time “Naftogaz” believe that the current gas reserves are enough for the heating season. And, if necessary, will be buying in Europe or Russia. This was stated by chief commercial Director of the company Yuriy Vitrenko, reports “Interfax-Ukraine”.

We will remind, the world Bank has given a guarantee to Naftogaz for a loan of $ 500 million for the purchase of gas.