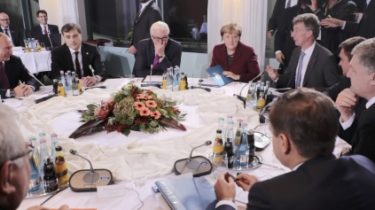 Poroshenko left the hall of negotiations.

The talks between the leaders of Ukraine, Russia, France and Germany lasted four hours with a short break.

Russian journalist Dmitry Smirnov, who is also in Berlin, reports that the President of Ukraine Petro Poroshenko left the meeting room. At the negotiating table left, Angela Merkel, Francois Hollande and Vladimir Putin – now they will discuss the situation in Syria.