In Berlin the talks, “Norman four” lasted for more than three hours 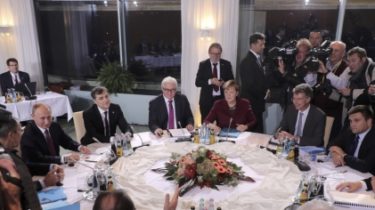 In Berlin the talks, “Norman four” lasted for more than three hours

It was assumed that the negotiations “channel four” will end at 22.00 on Kiev.

Negotiations leaders of the “Normandy format” (Ukraine, Germany, France, Russia) that started in Berlin at 19.30 environment lasted for more than three hours.

Previously it was assumed that the negotiations “channel four” will end at 22.00 on Kiev. It is also expected that after the meeting, the participants made a statement to the media.

In negotiations with the Ukrainian side in addition to Poroshenko also attended by the Minister of foreign Affairs Pavlo Klimkin and Deputy head of the presidential administration Konstantin Eliseev.

On the Russian side, in addition to Vladimir Putin’s participation the meeting was attended by foreign Minister Sergei Lavrov and Russian presidential aide Vladislav Surkov.

Earlier, a source involved in the event, reported that the negotiations “channel four” began with a delay. “Negotiations started late. It was initially planned that the meeting will start at 19.00 on Kiev, however, due to the late arrival of the President of Russia had to postpone its beginning”, – said the Agency interlocutor.

See also: Surkov came to the meeting in Berlin, despite the ban of entry in EU

Before the meeting in the Normandy format were held the talks between the German Chancellor and the President of Ukraine held a meeting Poroshenko, Angela Merkel and Francois Hollande, during which the leaders of the countries have coordinated their positions before the talks.

According to the original plan, “Norman dinner” to be completed after 22 hours in Kiev. The Ukrainian press will be able to communicate with the President of Ukraine Petro Poroshenko. Then, as Putin will have to stay for the talks with Merkel and Hollande on the Syrian issue.