In the negotiations in the “Normandy format” suddenly paused 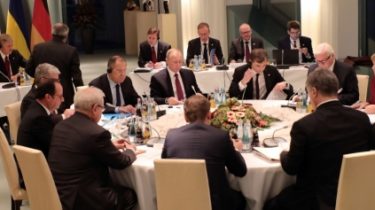 In the negotiations in the “Normandy format” suddenly paused

The reasons for interruption and its duration is currently unknown.

In the negotiations in “Norman format” in Berlin, made a break.

This was reported in the circles close to the negotiations, writes UNIAN.

After that, they will continue.

Until that meeting in the Normandy format lasted more than three hours.

See also: Surkov came to the meeting in Berlin, despite the ban of entry in EU

Now time frame for the completion of the negotiations is not known as not known causes break.

In the administration of the President of Ukraine Petro Poroshenko said that after a short break the meeting will continue.

According to information from the lobbies, in the negotiations decided to make a short technical break, then to continue with new force#NormandyFour pic.twitter.com/x59QA2VJxH

According to the original plan, “Norman dinner” to be completed after 22 hours in Kiev. The Ukrainian press will be able to communicate with the President of Ukraine Petro Poroshenko. Then, as Putin will have to stay for the talks with Merkel and Hollande on the Syrian issue.