The militants were sniper fire near the checkpoint “Maori” 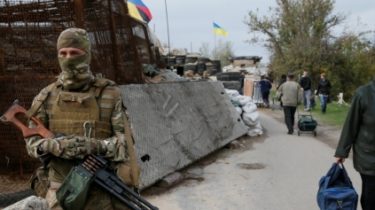 The militants were sniper fire near the checkpoint “Maori”

Because of the attacks pass through the demarcation line was temporary suspended.

Today, October 20, illegal armed groups carried out a sniper attack on the area near the control post “Maori”.

About it reports Public border service.

“The shelling of the road corridor was conducted by the sniper of terrorists. Now there goes dobostorta updated PPC”, – stated in the message service.

None of the guards and the travelling citizens were injured.

Because snaypersha enemy fire to avoid casualties among the civilian population, pass through the demarcation line was temporary suspended, subsequently, the badge was restored.

Recall, from midnight to 18 PM in the area of anti-terrorist operation recorded 20 cases of opening fire on positions of Armed forces of Ukraine by the Russian occupation forces.

Most 13 attacks were recorded in Mariupol direction. In particular, in the areas of Maryinka, Starohnativka and Pavlos the enemy was shooting from grenade launchers, machine guns and large caliber small arms, and in the direction of the Cherokee, Taramchuk and Krasnogorovka – mortars of 82mm and 120mm caliber.