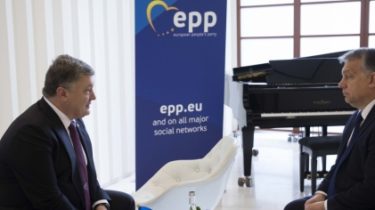 The parties agreed to intensify political dialogue at all levels.

President of Ukraine Petro Poroshenko had a meeting with the Prime Minister of the Republic of Hungary Viktor Orban.

This is stated in the message of press-service Poroshenko.

“In the context of conflict settlement in the Donbass, the parties discussed the prospects of further economic sanctions against Russia as an effective tool to ensure full implementation of the Minsk agreements and restoring the territorial integrity and sovereignty of Ukraine over the occupied territories”, – stated in the message.

Poroshenko thanked the Hungarian government for the provision of humanitarian assistance to Ukraine in the amount of 3.6 million US dollars and the treatment of Ukrainian soldiers wounded in the ATO area.

We will remind, Poroshenko enacted NSDC decision on sanctions against Russia. President of Ukraine Petro Poroshenko has signed a decree “On the decision of the NSDC of Ukraine of 16 September 2016 “On the use of personal special economic and other restrictive measures (sanctions)”.

The national security Council has extended sanctions against all individuals (except those who died) and entities which are introduced from 16 September 2015 and expanded sanctions list.