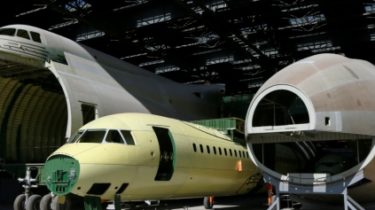 The debt of GP “Antonov” as of August 1, amounted to 1,27 billion hryvnias.

Today, October 20, the Verkhovna Rada adopted the law on debt restructuring of the state enterprise “Antonov”.

Voted 285 deputies, according to the official portal of the Verkhovna Rada.

The law on debt restructuring of SE “Antonov” to the state on the bonds of its predecessor SE “Kyiv aviation plant “Aviant”, released in 2009.

In the explanatory Memorandum stated that the debt of GP “Antonov” as of August 1, amounted to 1.27 billion hryvnia, to pay such amount, the company is not able to.

That is why MPs were allowed to repay the debt in equal instalments over 10 years starting from the first quarter of 2017. From the date of entry into force of this law, penalties and fines will not be charged, and already accrued (566 million) is canceled.

Therefore, “Antonov” will need to pay only 706 million of the principal debt.