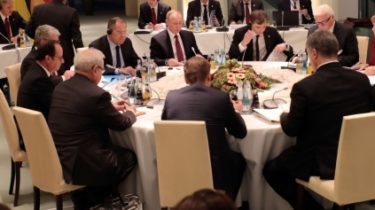 “Channel four” discussed not only the road map.

During the meeting, “Norman Quartet” in Berlin , they not only discussed the road map for the implementation of the Minsk agreements, but bezopasnostyu and humanitarian components of the agreements.

About this on air of the talk show “Right to Vlad,” said the Deputy head of the presidential Administration of Ukraine Conatin Elisha.

“The parties recognized the importance of the priority of the security components of the agreements that are concluded in the creation of a police mission to the OSCE, the withdrawal of Russian troops from the occupied territories, in the full access of the OSCE mission to non-government controlled areas of the border,” – said the representative of the presidential Administration.

See also: Road map of Minsk and the extension of the OSCE mission: as agreed “channel four”

“Finally after many months the Russian side has agreed to allow a red cross mission in the Donbass to check the locations where illegally detained Ukrainians. There is also a consent to the immediate release of the hostages”, – said Konstantin Eliseev.