The militants have used “Grad” at Luhansk direction – Lysenko 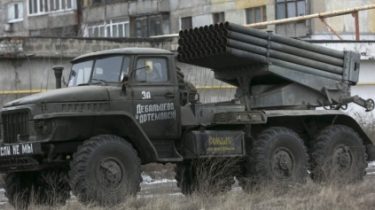 The militants have used “Grad” at Luhansk direction – Lysenko

Illegal armed groups after a long pause applied in the area of ATO systems of volley fire “Grad”, said the speaker of the Ministry of defense of Ukraine on ATO, Colonel Andrei Lysenko at a briefing in Kiev.

This is stated in the message UNIAN.

“At the Lugansk direction after a long pause, the militants again used multiple rocket launchers “Grad” firing 15 rockets. The fire was coming from the direction of Stakhanov”, – said Lysenko.

Just as the speaker noted, over the past day there were 12 enemy attacks on the Lugansk direction, 9 – and 18 at the Donetsk – Mariupol.

“As a result of yesterday’s shelling of the part of Krasnogorovka were left without electricity. There damaged the building of the closed transformer substation”, – said Lysenko.

See photos: The bright photo of the day: powerful teachings Ukrainian artillery, Turchinov, in the area of ATO

He also said that yesterday in the area of ATO were observed flying enemy UAVs.

We will remind, for the past day Russian-occupation forces 39 times opened fire at positions of the Ukrainian defenders of the Donbass. Dead among the Ukrainian servicemen no, but three were injured.