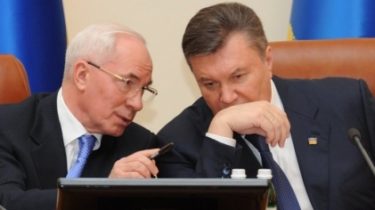 Ten people have already testified in court against the “family” of Yanukovych.

Members of the “family” of Yanukovych are trying to avoid criminal liability. And so in Ukraine began the “month of discrediting the General Prosecutor’s office” in the Internet-editions place a custom article. Also to the “bleaching” of Yanukovych and his associates may be involved in individual officials of the National Bureau of Interpol in Ukraine.

“The closer and the more dynamic we are approaching the direction of the indictments in court and in absentia conviction of representatives and members of the criminal organization Yanukovych, Kurchenko, Azarov, Arbuzov and all the others, including Klimenko, the more attempts and spending an insane display of an information resource on the creation of the negative or the defamation of police agencies. For example, we have accurate information, they have documentary evidence that the money stolen in Ukraine, in particular by Klimenko, channeled through certain people in a news Agency (online edition) in Ukraine to ensure the month of the discredit of the General Prosecutor’s office. In particular departments, which investigate cases against high-ranking officials. 20 thousand dollars a month is quite a powerful resource for any Internet-editions”, – said Matios (video from 21 min.).

See also: Lutsenko said, when the GPU is going to transfer in court business of Yanukovych and Co

He assured that such actions will provide procedural, “because funding at the expense of the complicity of a member of a criminal organization – article 256 of the Criminal code of Ukraine is very severe in punishment.”

“Moreover, the Prosecutor General’s office, in particular the military Prosecutor’s office, which investigates these criminal proceedings are likely and most probably next week we will give a procedure an assessment of the likelihood of the involvement of certain officials of the National Bureau of Interpol in Ukraine of complicity or assistance of members of the criminal organization Klimenko and Kurchenko, Arbuzov and Yanukovych in order to avoid criminal responsibility. I reported this answer officially. This may not be that Ukraine needs to “dance” from the will of three or four people and failing to abide by the rules ad wanted those or other persons”, – said Matios.

Matios also reported that ten people went to deal with the investigation in the criminal proceedings against the members of the “family” Yanukovych, in particular by Klimenko and Kurchenko. Their testimony they have confirmed in the courts, which had indicted and appointed conditional punishment.

“These are people who fully recognize their participation as members of a criminal organization of Yanukovych and others. Their names are known, gave a confession in relation to themselves and in relation to other famous people, events and deeds that they committed at the direction, instigation or coercion of the ring leaders. Confirmed his testimony in court, which approved it a verdict of guilty and has appointed punishment. But punishment “conditionally”, – said the chief military Prosecutor of Ukraine.

Matios also said that before the end of 2016, the court will give “business Katsuba, a case of criminal organizations Yanukovych in absentia condemnation of all (involved)”.

“We will do a mini-Hague in Ukraine for the whole of the criminal authorities. More than 100 people (will be) in a cage”, – said Matios.