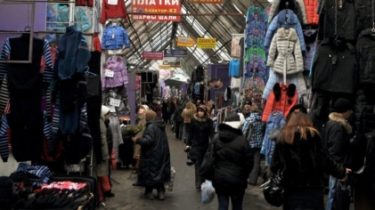 In September the price increased by 10%.

The fall has brought a noticeable jump in prices for items from the wardrobe. State statistics reported that the prices of clothing and footwear rose by 10%.

Journalists walked around the shops, looked at clothes, trying on shoes. Took import cheap, but branded. And our Ukrainian – like quality. For women’s wardrobe picked up a shirt, pants, shoes, dress and coat. For men – shirt, pants, shoes and jacket. It turned out, the Ukrainian – cheaper. Why? Enough of a jump in the Euro and import things from getting more expensive. And much more than domestic. However, the prices of imported items are no longer falling.

See also: Currency forecasts for the hryvnia. What will be the dollar and the Euro next week

The same thing, for example the pants, is much more expensive in Ukraine than in bolovani fashion of France. And it’s not just transport costs that are included in the price, explained the experts. To have the greatest impact on her foreign exchange risks. Well, domestic producers jacked up their prices very carefully: as a rule, only on the cloth, because it is bought abroad.

But, say, embroidery Coloma – unchanged in price for three years, because here almost all Ukrainian. The cost depends on the complexity and delicacy of ornament. And the manufacturer earns on the demand for shirts increases and sell more.

TSN went shopping to learn what has risen the most and why. Enough of a jump in the Euro and imported things from getting more expensive. And much bigger than ours. And no longer falling. The same thing is much more expensive in Ukraine than to pamper the fashion of France.