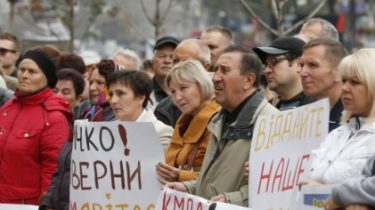 In Kiev, 40 buildings will remain in the winter without heating.

Almost 40 thousand Ukrainians became victims of a construction Scam of the century. In Kiev, 40 buildings this winter will not wait the supply of heat. And in many houses there is no light, no water, no gas, no elevators work.

The first trap speculator-developer – price per square meter was almost twice below the market in the capital. Also offered installments. Assured that all permits are all in order. In the official databases was considered that land allocated legally. It has now turned out that the houses built illegally, no permits. And it is the next trap. It is possible to bribes by petty officials and they have for years will not notice the illegal building.

In those homes that are connected to at least some utilities, rates – soaring. And all because the house Ghost is connected to, say, the light is not directly and temporarily from construction nearby.

The owners of such houses have become hostages of the Scam, which ran only one person – Anatoly Voitsekhovsky. On it for three months there is a consequence. Because he is the owner of dozens of companies that illegally seized land and erected high-rises. They sold the apartment two times cheaper than the market price, and promised mountains of gold. Here for example, one house as a demonstration dummy was built legally. New investors were taken on a tour to the happy settlers.

People trustingly gave the money, not knowing that their apartment may hang in the air. According to this scheme in the capital over the past 10 years has increased by 40 homes. Suffered about 15 thousand families – about 40 thousand people.

Why it’s hard not to notice any one Metropolitan officer since 2004? And now the winter these people? The advice from officials is one – look for the winter new home where there is heat. And to finish building homes, they say, should developer to whom the people gave their money.

Meanwhile, in one of these houses-the ghosts decided to create a cooperative and to build housing, renew an expired land lease, purchase of pipe, wire, pay “Kyivenergo” and ” % ” for carrying out communications and pobbiati thresholds in the offices of officials, in particular, the State architectural and construction inspection. By the way, this Agency is the control authority that checks the developer at every stage. Where were their eyes? No personal explanation – only a written response to eight pages. Talking about illegality, he knew, but the guards of the building on numerous tests no one was allowed.

The Inspectorate has no authority for coercion, especially for demolition work. To demolish the house, by law, can only be a Builder. Though a little hard to believe that he will do it. Moreover, at his own expense.

But people who have purchased flats here, most will fall under the tractor that allow the demolition. They are willing to invest thousands to preserve what is already there.

Meanwhile, there is another problem in such houses – the raider attack on the objects of Wojciechowski. Now the illegal building suddenly began to claim a bunch of unknown companies.

The impetus for our investigation the following was the announcement from the Kiev city administration – “Search for reserve apartments for the winter, to heat these will not!”. It concerns almost 40 thousand people. They were victims of a construction Scam in astounding numbers. We are talking about tens of thousands of people who were in illegal houses.