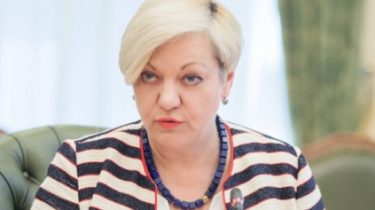 Chairman of the National Bank Valeria Gontareva says that the macro-financial situation in Ukraine is stabilized, a significant fall of the hryvnia on the foreign exchange market is not expected inflation for the year will be 12%, and the next will be reduced to 8%.

The head of the regulator said on the air of “Fakty” on ICTV.

“The rate budgeted (27,2 USD per dollar in 2017) are realistic. But I want to add that Ukraine has moved to a flexible exchange rate. This suggests that we long ago had to stop caring about the course. You have just to look at inflation. The exchange rate depends on the state of our balance of payments. The course is a mirror of everything that is happening in our economy. The whole world sees that we live in a stable macroeconomic situation”, – said Gontareva.

“Why 12%? Because regulated prices are now rising. All this is included in the forecast. I’m sure before the end of the year we will achieve a 12% inflation – this is a huge victory. Next year we are planning 8%. Inflation is the price level in the country. This is something that all of us should be concerned. One of the components of inflation is the rate of the national currency. Therefore, we cannot say that the national Bank does not pay attention to it. The national Bank is constantly concerned that our rate was stable”, – said Gontareva.

See also: Currency forecasts for the hryvnia. What will be the dollar and the Euro

The NBU also boasted improvements in the banking sector after Stripping the market of insolvent financial institutions.

“The NBU is not in the number of banks. Our goal is for Ukrainian banks were financially healthy. Do not regret about 82 banks, which we have brought from the market, as painful as it it was not. 20 banks were engaged in money laundering, and other stolen assets of depositors. The Deposit guarantee Fund of individuals ‘ deposits sent to law enforcement agencies 3248 statements for a total amount of 248 billion. I want the owners of these banks knew: in April 2015 the Verkhovna Rada voted for the law (which is) on the responsibility not only of management of these banks, but shareholders,” – said the head of the national Bank.

In addition, since the beginning of the year in the banking sector increase the amount of funds that the Ukrainians have deposits. The growth rate is 7% (12 billion UAH).

“So we have no problems with macro-financial stability nor balance of payments or current account or reserves, which cover more than four months of imports, nor foreign exchange market (the national Bank bought a population of 1.3 billion hryvnia this year),” – said Gontareva.

Earlier, the NBU voiced autumn forecast for the hryvnia in the currency market.