War and the abandonment of the occupied territories: Poroshenko called for two alternatives “Minsk” 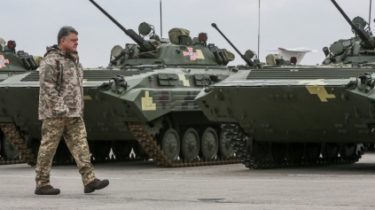 War and the abandonment of the occupied territories: Poroshenko called for two alternatives “Minsk”

The President criticized those who propose to abandon the Minsk agreements.

There are two alternatives to the Minsk agreements: a military solution to the conflict in the Donbas or rejection of the occupied territories.

“He who proposes to abolish the “Minsk” – it needs to offer an alternative. Alternative two: a military solution to the conflict and open attack on the Russian Federation. I ask you to compare military budgets and capabilities, was asked to assume responsibility for future victims,” – said the President.

Read also: Poroshenko warned that in case of withdrawal of Ukraine from the “Minsk” will be removed from Russia sanctions

Poroshenko noted that the political forces who offer to give up the occupied territories in exchange for peace, will be disappointed.

“These political forces and their supporters, who are against Minsk, will not receive neither peace nor territories. Therefore these statements are absolutely irresponsible,” the President added.