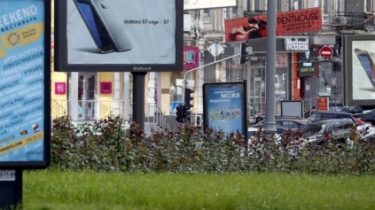 According to the study, about a third of respondents believe that the amount of advertising to reduce don’t need about 40% in favor of a slight reduction in external advertising.

It on a press-conferences in the UNIAN were reported by the founder of the sociological group “Rating” Igor Tishchenko during the presentation of the results of sociological research “Evaluation of selected aspects of development of Kyiv: advertising, tourism”, held jointly with the Association of outdoor advertising of Ukraine.

See also Klitschko instructed to conduct inspections in all the structures of KCSA, which are related to advertising in the city “Please note that only 5% of Kyiv residents said that they are concerned about the chaotic placement of street advertising and only 4% – an excessive amount of outdoor advertising on the streets of the city”, – said Tishchenko, adding that the people of Kiev more important are the tariffs for utility services – 77%, corruption in city government – 36% and the quality of public services – 36%.

“It was important for us to understand how, according to Kiev, has reduced the number of outdoor advertising in the city, – said Polishchuk. – It sounded different interest on the part of the municipality. Sounded 30-40%, then 80%, sometimes even voiced the idea to release almost the entire Kiev from external advertising. The power in these statements always referred to the opinion of the community that the request of the citizens”.

She stressed that the percentage reduction offered by the Association, fully meets the expectations of the majority of Kyiv residents, according to the study. “Our plan of reforming of the market of advertising – to-one reduction and quality improvement through the systematic placement. The percent reduction is from 40% to 50% depending on the street. It fully meets the expectations of the people of Kiev, who we see in public opinion polls,” Polishchuk said, adding that the cuts should be proportional to prevent their use for the monopolization of the market by one of the participants.

Tishchenko said that the study, conducted in the second half of September, surveyed 1,000 people of Kiev, who represented the population by age and sex. The statistical error does not exceed 3.1 per cent.

Receipts in the budget of Kyiv for use in places of communal ownership for placement of outdoor advertising in January-July of 2016 amounted to more than 110 million UAH, which is UAH 29 million greater than income over the same period last year.