Militants continue to actively shelling near Mariupol. Chronicle of the ATO 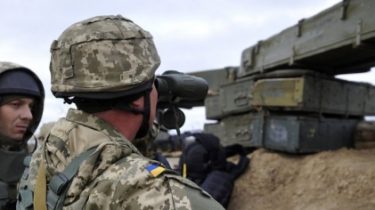 Militants continue to actively shelling near Mariupol. Chronicle of the ATO

During the last days the Ukrainian military has recorded 35 enemy attacks.

Sunday, October 23, fighters 35 times opened fire on positions of Ukrainian military in the ATO zone in the Donbas. Mostly in the district of Mariupol, Donetsk region.

This is stated in the summary of the press center of staff ATO as at six o’clock Monday morning, October 24.

On the Mariupol directionand has recorded 20 attacks-provocations against ATO forces. The militants fired machine guns of large caliber, rocket-propelled grenades and small arms at Shirokino, Talakovka, Marinka and Taramchuk, and in Krasnogorovka and Pavlopole, in addition to the weapons used and even mortars caliber 82 mm

On the Luganoness was nine fire fighters. On the Ukrainian positions, they opened fire from grenade launchers, machine guns and small arms in areas of Novozvanovka and Novoaleksandrovka, in the Crimean and Happiness – mortars 82-mm caliber.

On Donetsk the direction, and six attacks. In particular, in Lugansk fighters used during provocations mortars 82-mm caliber, in the town – rocket launchers, machine guns and mortars 120 caliber.

Meanwhile, the President of Ukraine Petro Poroshenko named the main success of the Normandy meeting in Berlin on the Donbass.