On the entrepreneurial business forum, the bankers said, who exactly is feeding power to 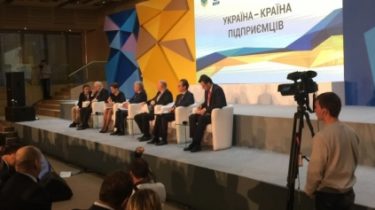 On the entrepreneurial business forum, the bankers said, who exactly is feeding power to

In Kiev at the first Ukrainian business forum for entrepreneurs has launched a new program to support small business, which will help to start your business to everyone.

In Ukraine in the shortest possible time should be created the most favorable conditions for entrepreneurs, small businesses, as this sector of the economy is crucial for the Ukrainian economy, and its development a key national security issue. This was stated by the Chairman of the Board of the largest Ukrainian Bank PrivatBank in his speech at the first forum for entrepreneurs “Ukraine is a country of entrepreneurs”. “It is the entrepreneur who today feeds the President, the Parliament, the army, and we all look at him as a potential offender who evade taxes,” – said Alexander Dubilet in the panel discussion of the forum focused on business support. According to him, officials of the government and local authorities indicator of jobs created in the near future should be the main assessment of the quality of their work.

At the same time, according to speakers at the forum, representatives of the government ignored in the debate about the policy of support of small business. According to the President of the Ukrainian Union of Industrialists and entrepreneurs Anatoly Kinakh, who was the organizer of the forum, in Ukraine today consider themselves middle class, only 1% of the population, while in Poland the middle class of entrepreneurs is 40%. “While other basic industries, the crisis, the government should consider the development of self-employment, small and medium business as your strategy, it’s new jobs, growth of solvency of the population, formation of middle class. Ukrainian society is ready for it: over 60% of young people would like to start their own business,” said Anatoliy Kinakh.

Given the figures on the forum for migration of the working population in the countries of Europe sounded very emotional. Only in Poland this year will issue more than 500 thousand work visas. If you do not reverse the trend in the country, except for pensioners and civil servants will be nobody, – said the participants of the forum. To overcome this negative trend, the forum announced the launch in Ukraine of a new program of small business support “Country of entrepreneurs”, which in the financing of 20 billion in the coming years could create about 1 million jobs. As noted by the developers of the project, in the first six months of the portal “CUBE”, Ukrainian entrepreneurs received from investors to Finance the start or development of their own business more than 1.5 billion UAH, which helped to create 71 new jobs.

The first business forum “Ukraine- a country of entrepreneurs” brought together more than 500 young entrepreneurs and those who only dream about own business. In addition to performances, government representatives and international organisations, inspiring success stories of young Ukrainian entrepreneurs, the forum participants got first hand useful tools to simplify the operating activities, individual advice from experts in business registration, accounting, tax reporting, legal support services, franchising, e-Commerce.