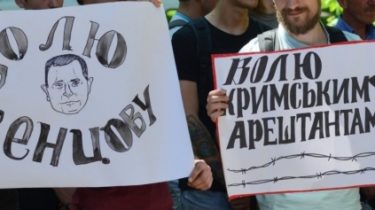 Illegally a prisoner in Russia Ukrainian Director Oleg Sentsov was transferred to a punishment cell. This was announced by the sister of the prisoner Natalia Kaplan, says the story TSN.19:30.

For this step the Russians came after refused to extradite Sentsov and Oleksandr Kolchenko sister. Kaplan suggested that this may indicate the beginning of the torture her brother. In Moscow, the refusal was justified by the fact that both prisoners are allegedly citizens of the Russian Federation. In fact, prisoners Ukrainians registered in Crimea and its annexation was not recognized. FSB detained Sentsov and Kolchenko to the Peninsula two years ago. They were accused of terrorism and sentenced to 20 and 10 years in prison, respectively. The release of political prisoners have repeatedly demanded the Ukrainian, European and even Russian filmmakers and politicians.

Earlier it was reported that Ukraine will try to barter Sentsov and Kolchenko on the Russians. It is also possible that Ukrainian political prisoners will be pardoned by Russian President Vladimir Putin, as was the case with Gennady Afanasyev and Yury Soloshenko, and Deputy of the Verkhovna Rada Hope Savchenko.

A prisoner in Russia Oleg Sentsov was transferred to solitary confinement

This was announced by the sister of the prisoner Natalie Kaplan. She suggested that this may indicate the beginning of the torture her brother. For this step the Russians came through the day after it refused to extradite Sentsov and his brother Oleksandr Kolchenko in Ukraine. In Moscow, the refusal was justified by the fact that both the prisoner, allegedly, are citizens of the Russian Federation.