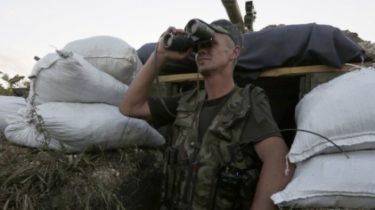 For the last day on our positions was released almost a hundred mortar shells of various caliber.

Over the past day in the area of ATO was wounded 7 members of the Armed forces of Ukraine.

On this day, 24 October, said the speaker of the Ministry of defense of Ukraine on ATO Colonel Andrei Lysenko.

“Over the past day by fighting killed Ukrainian soldiers seven soldiers were injured due to shelling,” – said Lysenko.

He also added that confirmed the loss of the enemy, who make up six dead and six wounded invaders.

“For the past day on our positions was released almost a hundred mortar shells of various caliber,” – said in the message.

Recall baevice of one of the illegal armed groups of the terrorist “DNR” detained in the area of the antiterrorist operation.

It is known that the man had joined the militants in April 2014, with weapons in their hands were on duty at checkpoints city Tarack, checking documents and cars of Ukrainian citizens.