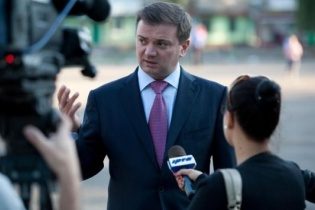 Prosecutors have closed proceedings against him.

The General Prosecutor of Ukraine closed the criminal proceedings against the former people’s Deputy from Party of regions Vladimir Medianik and he was released.

This was reported by his lawyer Oleg Babich, reports “Interfax”.

“The General Prosecutor of Ukraine adopted a decision to close criminal proceedings against Medianik. Today Vladimir Yuryevich released, all claims against him removed,” he said.

See also: Pechersk court arrested the defendant in the “case of Ephraim” Medyanik

We will remind, Medyanik was soon to get out of detention, because prosecutors have no evidence against him. This was stated by Prosecutor General Yury Lutsenko to journalists at the National Academy of Prosecutor’s office.

August 8, Pechersk district court of Kiev arrested for two months eks-the Deputy from Party of regions Vladimir Medyanik – defendant in the case of Ephraim. As you know, Ephraim was detained at the airport “Borispol”when he tried to fly to Vienna. He is suspected of infringement of territorial integrity and inviolability of Ukraine, namely – involvement in the creation of the so-called “LNB“. It is noted that the former regional can still bring charges of financing terrorism.