Lutsenko explained who to deal with Yanukovych and his entourage 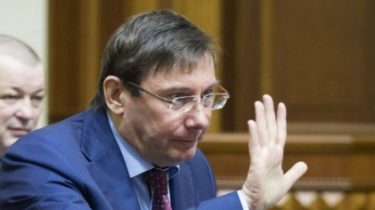 Lutsenko explained who to deal with Yanukovych and his entourage

The attorney General told us why she decided to create a new control.

The new office of the Prosecutor General, which will deal with a case concerning ex-the President Victor Yanukovych and his associates, will lead the subordinate to the head of the Department of special investigation Sergey Gorbatyuk Dmitry Bass.

This was stated by Prosecutor General of Ukraine Yuriy Lutsenko, reports UNIAN.

“Slave Gorbatyuk, which is already half a year working his head, now separates and becomes an independent chief, and will be provided by the law of conviction, and evidence in the courts will be the ones that got Gorbatyuk and his team for 2.5 years”, – he said.

Lutsenko explained that the restructuring of the Department, in particular, the selection of one of the offices, was caused “solely by the reluctance of Mr. Gorbatyuk convey an economic case against Arbuzov, Kluev, Azarov, Yanukovych, Jr., etc. the law provided for a special method of conviction”.

“I can’t imagine that these things and then three, four, five years – will be based in the Department of special investigations. This means only one thing – the lifting of sanctions against the assets of Yanukovych and his GOP companies and the collapse of all hope of people to take wealth, has a criminal way”, – he added.

At the same time, the PGO reported that Sergei Gorbatyuk in the future remains the head of the Department of special investigations, which includes 56 employees and who will continue to investigate and will give the court the case concerning the events on the Maidan.