Residents of the capital Darnitsa suffocate from the stench of the landfill, which is considered illegal 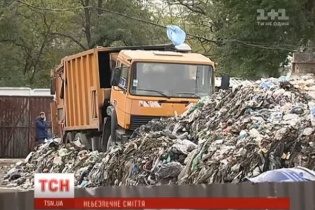 Residents of the capital Darnitsa suffocate from the stench of the landfill, which is considered illegal

Locals believe that due to the garbage the acute illness.

Residents of Kiev Darnitsa for several months, can’t breathe from illegal, in their opinion, the garbage, says the story TSN.16:45.

Every day piles of garbage increase. On the streets there were huge rats, people became sick.

The landfill began over 10 years ago. Every day private trucks to deliver heaps of stinking waste. Local complain that garbage is getting more and more every day and no exports. It smells terrible. In the summer, can’t even open the Windows.

Irina lived in the area most of my life. Recent years, complaining about the woman living here has become extremely difficult and dangerous.

“These mountains of garbage that are not disposed of for months, the garbage rots. Moreover, it produces methane. Here is enough to throw the match. The stench is unbearable. The stench is in the courts. Rats! Mouse!”, – complains a local resident.

From-for dumps in recent years, residents of the area have worsened chronic lung disease. Started to hurt children. People believe the garbage dumped here illegally. And where’s it coming, do not know. To get inside the TSN journalists cannot. People outside the gates called an employee of the landfill and assures that all legally.

“This is private property, we have all the documents to work,” said the man.

Dangerous neighborhood: the residents of Kiev Darnitsa complain about the increase in the landfill near their homes

Residents Darnitsa for several months, poisoning, illegal, in their opinion, a dump. Every day piles of garbage grow. On the streets there were huge rats. Through the dump recently, residents of the area have worsened chronic lung disease. People believe the garbage dumped here illegally.

TSN was able to figure out – the land on which the dump belongs to the Kiev radio factory. There on the phone explained that a few years rented land in rent to the municipal enterprise Kievteploenergo. And since December of last year on the contract surrendered the lease to private enterprise, which is engaged in processing of garbage. According to the Deputy Director of the radio plant, waste sorting on the basis of broken equipment. Because of this, the garbage is not sorted and are not transported to the landfill.

The office of the state supervision over observance of sanitary legislation claim – dump is illegal and is a threat to human health.

“In the first place is a biohazard, these are the sources for rodents. The second is the natural environment and those people who are in close proximity, this selection is in the air organic substances,” explains the Deputy head of the Department of the state administration Dmitry Bayrachenko.

To suspend the dump only at the official request of the inhabitants of the district. Therefore, the official advises to hurry. If during the inspection they revealed violations and it turns out that there is a threat to human health, the dump will be eliminated, says Batrachenko. Manual sorting of the database promised to take out the trash for two weeks. Local residents will relocate the dump to another place, away from their homes.