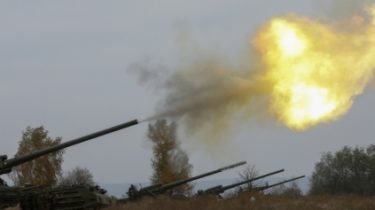 The hot remains of the Mariupol direction.

Six Ukrainian soldiers were wounded during the day on the front. More than 40 times the militants attacked the positions of our defenders in the Donbass, says the story TSN.19:30.

The most difficult situation is in Mariupol direction. There is ongoing fighting around Marinka, Granite and in the area of Pavlopol, Shirokino. In all directions terrorists fired heavy mortars.

Significantly worsened the situation in the sector of “Donetsk”. If the occupants in the area of Avdeevka released hundreds of mines, now the headquarters of the ATO counted 230 explosions of shells, including 122 caliber artillery. Most of all suffered from attacks in this day Avdiivka industrial zone, positions near Luhansk and Zaitsev.

VV the same time, in the Luhansk region for a second day in a row recorded a decrease in fire activity of the militants. There are terrorists three times opened fire at the Village Lugansk and Novooleksandrivka.

During the day, six Ukrainian military were wounded in the Donbas

This information is from private sources TSN. All military – fragments in the body. Fighters were hospitalized. Their life is not in danger. More than four dozen times, the militants attacked the positions of our defenders in the Donbas.