NATO stated that Russia is not going to stop destabilizing Ukraine 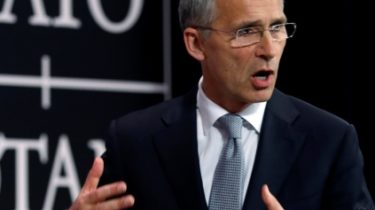 NATO stated that Russia is not going to stop destabilizing Ukraine

Russia continues military and financial support for the separatists.

Russia continues to provide financial and military support to the rebels in the East of Ukraine, said NATO Secretary General Jens Stoltenberg.

He said this in Brussels today in the headquarters of NATO before the two-day meeting of defense Ministers of countries-members of the Alliance, reports UNIAN.

Read also: Poroshenko called the main success of the Normandy meeting in Berlin on the Donbass

“Russia continues to destabilize Eastern Ukraine with military and financial support to the separatists. It is not helps reduce stress or restore predictability in our relations”, – said the NATO Secretary General.

He also noted that the Ministers will discuss “recent military activities of Russia along our borders.”

“Near our borders, Russia continues certain military behavior including massive amount of sudden exercise. Russia has placed nuclear-capable missile system “Iskander” in Kaliningrad and terminated the contract for the disposal of weapons-grade plutonium from the United States,” he said.

The Ministers also will speak about how to “take forward the decisions which we adopted at the summit in Warsaw – both to increase deterrence and defense, and by designing stability beyond our borders”.

“We note the progress in increasing the NATO presence in the East of our Alliance in the Black sea region”, – said Stoltenberg.

NATO can increase the number of troops in Eastern Europe

Four battalions in Estonia, Latvia, Lithuania and Poland. And in fact a new intelligence. In Brussels today will meet the defense Ministers of NATO countries, their talks would last two days. The meeting must be momentous.