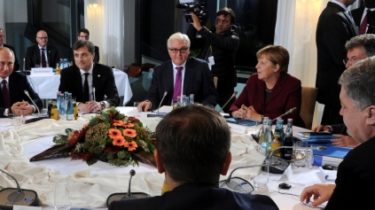 About this informed the head of state Petro Poroshenko.

Russia has refused to representatives of the International red cross organization, admission to the Ukrainian hostages in the Donbas, contrary to the agreementsreached in Berlin during a meeting in Normandy format.

This was announced by the President Petro Poroshenko during the presentation of credentials by Ambassador extraordinary and Plenipotentiary of the Republic of Poland in Ukraine Jan Inferno, reports the press service of the head of state.

See also: Alternative “Minsk”, bizviz with the EU and the demilitarization of debaltseve. The full interview with Poroshenko

“This is absolutely unacceptable, when agreements are not fulfilled,” – said Poroshenko and stressed the inadmissibility of nonfulfillment of the agreement on the ceasefire across the contact line and in the zone of separation of the parties.

Poroshenko also announced that representatives of the OSCE observation mission once again came under fire, and about the attempt of the Russian fighters to establish an observation post on divorced site, which was prevented by the Ukrainian military.

Earlier, Poroshenko said that in case of default by Russia of the Minsk agreements , the European Union will extend and strengthen sanctions against Moscow.

Poroshenko said that Ukraine will receive a visa-free regime

President in an interview to Ukrainian TV channels said that it will be done on November 24. According to him, the delay arose because of a dispute between EU institutions on the so-called mechanism of suspension bizwise. “Despite the fact that Ukraine this discussion is absolutely not touched, and the touched countries in the Middle East,” said Poroshenko.